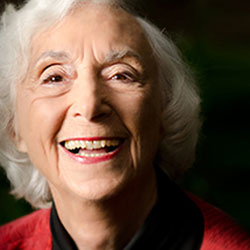 You can read the letter released announcing her passing here:  https://www.barbaramarxhubbard.com/barbara-s-health-updates

On April 30th, 2019, her family and friends celebrated her life with a Memorial, which was broadcasted live through Zoom conferencing, sharing her memory through stories and insights. You can watch a recording of the Memorial by following this link:  https://www.agnt.today/inspirations

Dr. Barbara Marx Hubbard has been a pioneer in positive options for the future for the past 35 years. A public speaker, author, social innovator and evolutionary teacher, she is President and Executive Director of the Foundation for Conscious Evolution.

A graduate of Bryn Mawr College with a B.A, cum laude in Political Science, Dr. Hubbard studied at La Sorbonne and L’Ecole des Sciences Politiques in Paris during her Junior Year. In the 1960’s she published one of the first newsletters on evolutionary transformation called The Center Letter in collaboration with Abraham H. Maslow, founder of Humanistic Psychology. She worked closely with Dr. Jonas Salk and was one of the original contributors to the Salk Institute. In the 70’s she co-founded The Committee for the Future in Washington D.C., which developed the New Worlds Educational and Training Center based on her work. She co-produced 25 SYNCON conferences to bring together people from every field and function to seek common goals and match needs and resources in the light of the growing edge potentials of humanity. In 1984 her name was placed in nomination for the Vice Presidency of the United States on the Democratic ticket, proposing a Peace Room in the White House and throughout the world to scan for, map, connect, and communicate what is working. She was one of the original directors of the Center for Soviet American Dialogue and served as a citizen diplomat during the late 80’s. She has been instrumental in the founding of many important organizations and initiatives including the World Future Society, New Dimensions Radio, Global Family, Women of Vision in Action, the Foundation for the Future, the Association for Global New Thought and The Alliance for the Advancement of Conscious Evolution. She was awarded the first Doctorate in Conscious Evolution by Emerson Institute.

Dr. Hubbard has authored five books: The Hunger of Eve: One Woman’s Odyssey toward the Future; The Evolutionary Journey: Your Guide to a Positive Future; Revelation: Our Crisis is a Birth; Conscious Evolution: Awakening the Power of Our Social Potential; Emergence: The Shift from Ego to Essence: 10 Steps to the Universal Human.

Her EVOLVE website (a Global Community Center for Conscious Evolution, at www.evolve.org) serves as an education, resource and communication hub to foster synergy and cooperation among organizations and communities worldwide. She has launched a first on-line evolutionary educational program (available within EVOLVE) called Gateway to Conscious Evolution, It offers a new developmental path to the next stage of human evolution, linking global participants with key ideas and innovators now building a positive future. Through this work, communities dedicated to conscious evolution are being fostered. The Conscious Evolution Community in Santa Barbara is serving as a global model of future-creating community. Through interviews and tele-lectures with guest colleagues she is initiating a communication outreach for the emerging world, and through live presentations she powerfully communicates the New World view of Conscious Evolution as a guiding perspective during this period of radical change.

Dr. Hubbard is the mother of five and the grandmother of 6, and resides in Santa Barbara, CA. To read more about Dr. Marx Hubbard, visit her personal site.