Our Moment of Choice

Our moment of choice is at hand. There has never been a more urgent moment for humanity to come together in synergy and collectively choose to hold the greatest vision of what we can be and do together, to lead with our hearts and co-create new possibilities that will offer us hope for our future. This uplifting and timely book is a call to action, offering evolutionary visions, resources and practical steps to help us navigate this moment of choice and amplify the movement for global transformation, upon which our future depends.

by James A. Cusumano, Ph.D.

In this remarkable book about the nature of true reality, Jim Cusumano explores the world of quantum physics and what it can teach us about consciousness and spirituality. His explanation of the way theoretical physicists understand the nature of the reality – consciousness connection will open up a new world for many. He explains how scientists and the ancients have reached many of the same conclusions about the nature of the universe despite their different paths to truth and their different ways of knowing.

by Jerry B. Brown, Rinaldo S. Brutoco, James A. Cusumano

Imagine a book with a roadmap for ending America’s dangerous dependence on imported oil and the global warming that is threatening the planet. This is that book.

Profiles in Power: The Antinuclear Movement and the Dawn of the Solar Age

Profiles in Power: The Antinuclear Movement and the Dawn of the Solar Age traces the impact that activists of the antinuclear movement had on the collapse of the nuclear power industry. The book includes profiles of ten leaders who played roles in the industry’s decline and the emergence of solar as an alternative energy systems. 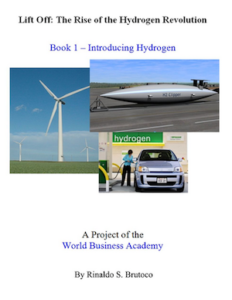 Lift Off: The Rise of the Hydrogen Revolution

Are the systems that make human life possible on planet earth headed for collapse? Or are we on the brink of a revolution in energy that could create abundance and a truly sustainable world? Hydrogen power can enable an abundant renewable energy economy with the potential to provide the power to regenerate our ecological systems, halt and reverse climate change and ultimately provide for a more just human society.

Find out how and how you can become a part of the crucial effort to create this new energy paradigm. This could be humanity’s last best chance.

Read Lift-off: the Rise of the Hydrogen Economy now!