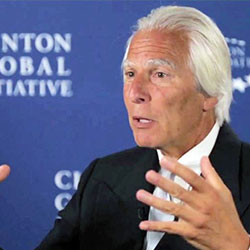 David Gershon, co-founder and CEO of Empowerment Institute, is one of the world’s foremost authorities on behavior-change, community empowerment and large-system transformation, and applies this expertise to issues requiring community, organizational, and societal change. His clients include cities, large organizations, government agencies, and social entrepreneurs. He has addressed a wide diversity of issues ranging from low carbon lifestyles, livable neighborhoods, and sustainable communities to organizational talent development, corporate social engagement, and cultural transformation. Over the past thirty years the empowerment programs he has designed have won many awards, and a major academic research study described them as “unsurpassed in changing behavior.”

David used this empowerment proficiency to conceive and organize at the height of the cold war, in partnership with the United Nations Children’s Fund and ABC Television, one of the planet’s first major global consciousness-raising initiatives—the First Earth Run. Building on his background as the Director of the Lake Placid Olympic Torch Relay, he used the mythic power of relaying a torch of peace around the world to engage the participation of twenty-five million people in sixty-two countries, the world’s political leadership and, through the media, an estimated 20 percent of the planet’s population in an act of global unity. Millions of dollars were also raised as part of this event to help UNICEF provide care for the neediest children of the world.

David is the author of eleven books, including the award-winning Social Change 2.0: A Blueprint for Reinventing Our World, and best-sellers Low Carbon Diet: A 30 Day Program to Lose 5,000 Pounds and, with his wife Gail Straub, Empowerment: The art of Creating Your Life As You Want It. He co-directs Empowerment Institute’s School for Transformative Social Change which empowers change agents from around the world to design and implement cutting edge social innovations. He has lectured at Harvard, MIT, and Johns Hopkins and served as an advisor to the Clinton White House and the United Nations on behavior change and community empowerment issues. To read more about David Gershon, visit his personal site.