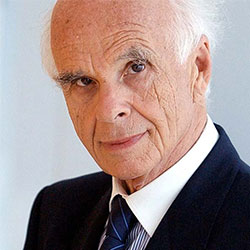 Dr. Ervin Laszlo is a Fellow of the World Business Academy.  He is the Founder and President of the Club of Budapest, President of theWorldShift Network, the Founder of the General Evolution Research Group, Co-Chair of the World Wisdom Council, Fellow of the World Academy of Arts and Sciences, Member of the International Academy of Philosophy of Science, Senator of the International Medici Academy, and Editor of the international periodical World Futures: The Journal of General Evolution.  He has a Ph.D. from the Sorbonne and is the recipient of honorary Ph.D.’s from the United States, Canada, Finland, and Hungary.

Dr. Laszlo is the recipient of the Peace Prize of Japan (the Goi Award), and the International Mandir of Peace Prize in Assisi, and has been nominated for the Nobel Peace Prize. He is the author or co-author of 54 books translated into 23 languages, and the editor of another 31 including his new book,WorldShift 2012: Making Green Business, New Politics, and Higher Consciousness Work Together.

Earlier this year, with Marco Roveda, he electronically published a free e-book, Finding Bliss in the Shift, which describes the roots of our global sustainability crisis and the way we can overcome it through a shift in consciousness. To read more about  Dr.Laszlo, visit his personal site.