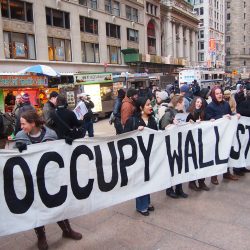 Editor’s Note: This article first appeared in Birth 2012 and Beyond by Barbara Marx-Hubbard, published May 2012.

We are on the verge of witnessing the birth of a new economic order from the ashes of the old. We’ve been a first-hand witness the last several decades to the dissolution of the old political and economic systems that brought us to this point. And we can now say with some confidence that the time has come for the existing economic order to pass away.

During the past year, the human hunger for social and economic justice has led to an upwelling of protests around the world, from the Arab Spring to the Los Indignados movement in Spain to Occupy Wall Street with its many offshoots. These global protests continue to inspire and reenergize each other, creating a new kind of global community.

From an economic view, what has happened that gives rise to this birth of a politicized global consciousness? The 2008 financial crisis, the ensuing bank bailouts, the Eurozone crisis, and harsh government austerity programs have all starkly revealed the fault lines in the economic systems that protect the rich and the powerful at the expense of the poor and middle class. So long as the middle class escaped the economic injustices that befell the world’s poor, the political will for fundamental change was missing. We’re now obviously in another era.

Whether or not the financial system collapses in the near future over the crisis in the Eurozone or the unresolved issues left over from the Great Recession, the unacceptable inequities and environmentally destructive practices at the heart of the global economic system show that a systemic change must occur in the way we approach the distribution of goods and services in our global economy.

What we do know is that the distribution of goods and services on the global level is woefully inequitable. We also know that 21,000 children will die today for lack of access to portable water, food, and adequate medical care. Global society has long passed the point economically where half the world’s population is enslaved by the global economy. As Abraham Lincoln said before the American Civil War, we cannot long endure “half slave and half free.”

The global financial system that was wrapped around this inequitable distribution of goods and services is itself coming apart. We do not yet know whether the final cause of the system’s breakup will be the euro crisis, the entry of China as a new dominant player on the field, the disintegration of practical politics in the United States, or other causes as yet unseen. But the destabilizing forces already undermining the existing world order are undeniable.

What we have for a certainty is an economic system in great jeopardy of collapse because it is destroying the planet and leaving far too many people desperate, hungry, thirsty, and uneducated—and far too many children dead—and those tragic statistics are worsening every day. At every level, the economic system isn’t working for the vast majority of the seven-billion people on the planet.

How do we change the economic system to extend social and economic justice to the vast majority of people? Every person on the planet has a right to adequate potable water, food, medical care, housing, and non-gender-biased education. These are basic human rights.

The greatest act of international charity—the greatest eleemosynary act in human history—occurred in 1947 with the Marshall Plan. The United States decided that if it would help Europe and Japan rebuild their economies, at the very least, the US would be less likely to have another war with Germany and Japan, and they might even become friends.

Germany and Japan not only did not declare another war, but they have gone on to become the United States’ closest allies for sixty years. That act of rebuilding a broken Europe and a broken Japan involved the United States spending its money to restore their roads, sewers, schools, highways, manufacturing sectors, and all the things that go into making a civilian society. As the United States spent that money, the country’s civilian sector expanded and prospered through meaningful work projects and became the richest society by far in the history of the world.

Out of what was perceived to be an act of charity came the creation of the greatest accumulation of wealth the world has ever known—an explosion of wealth that for fifty years propelled not only the United States but also the entire world forward. The Marshall Plan was a huge success for Europe and Japan, a gargantuan success for the United States, and the single most important component of global prosperity for the entire planet. Talk about “win-win!”

We now stand at the threshold of the next great reconstruction opportunity—and this time it is not limited to Europe and Japan. This time, by enlisting every country in the world in the task, by helping them see that their participation is in their self-interest, a new kind of consciousness will take hold—a consciousness that has evolved to such a point that it chooses to provide everyone on Earth with adequate water, food, shelter, medical care, and education. And that cannot happen by accident.

In fact, with the pressure of climate change upon us, if we do not act quickly, the planet and its inhabitants will be decimated. Those of us who survive will be left trying to reconstruct the planet, but with far fewer resources at our disposal than we currently possess.

We need to look at the opportunity and embrace the fact that we are the people we have been waiting for. The way to have a world that is no longer “half slave and half free” is very simple: free everyone. That’s exactly what Lincoln realized during the Civil War and that’s what we need to realize today.

The choice is not to economically enslave more people, or to stand by while the number of children dying a day goes from 21,000 to 50,000. The choice is not to stand by casually while the planetary population goes unfed and the biosphere that sustains life is destroyed, causing massive dislocations even of the super-rich in certain countries, along with destitution and poverty everywhere else. The choice is to see that we can solve every single problem in the world—including global population growth, which will fall of its own accord as we raise economic opportunities around the planet. That’s precisely the challenge and the opportunity of global reconstruction.

Having taken on global reconstruction, we will reconstruct the world as we did in 1947 in a way that will add more and more well being economically, spiritually, and emotionally. And, as we do so, we will see ourselves extending a helping hand to the downtrodden while in the process enriching ourselves.

Like the mythical phoenix bird that rises from the ashes of the dead phoenix consumed by a fire of its own making, a new economy can arise from the death of the old if—as a matter of conscious evolution—we choose to consciously create a system that is radically different from the one that is dying all around us. That new system would be based on the concept of global reconstruction arising out of a profoundly deeper sense of community.