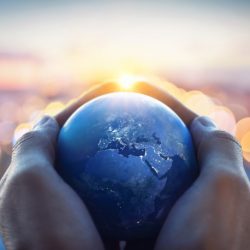 The Rise of Universal Consciousness

“Peace on Earth, Good Will to Man”

The phrase above originates from the King James Version of the Gospel of Luke, and although gender specific, was meant to refer to all humankind. Hence, a better way to trumpet this phrase is “Peace on Earth Good Will to All.” This week is the most appropriate time of the year to pause and recall a very ancient tradition in the West: Ceasing our constant power struggles for a moment to wish for “peace on earth.” How badly human civilization has thus far failed in living this profound truth. We should wish for peace and good will for all. We should want for all our efforts to lead to greater levels of peace and prosperity. Why wouldn’t we?

It’s hard to wrap our minds around the profound concept of “peace on earth.” What could “peace” possibly mean given the current pandemic conditions, complicated by the global recession, and fueled by an appropriate angst over climate change? There are many troubling clouds darkening our sense of security and domestic satisfaction this Holiday Season. Yet, there are glimmers of blue sky we can clearly see if, and when, those clouds begin to part and give us back a semblance of safety that the world we live in is inherently a good place.

One “cloud” that has partially lifted is a fascinating recent study by the University of York proving the level of global violence has actually gone down the past 30 years. Conducted by York’s Department of Mathematics, the study used sophisticated algorithms just this past June to conclude that battlefield deaths from the Napoleonic Wars to the present (particularly the enormous carnage of the period of 1910-1953) has fallen noticeably in the last 30 years. Beginning in the early 1990s, the actual percentage of battlefield deaths that occurred has dropped significantly. The study is Eurocentric due to the source of data, but the conclusions have been separately acknowledged with appreciation by Dr. Steven Pinker, a cognitive psychologist at Harvard University, who has written extensively on the subject of the global drop in per capita violence since the Second World War.

Although “battlefield deaths” is but one index of whether the world had become less “violent,” it is probably the best one we can analyze from the array of other considerations. For example, has the world become less violent reflected in our willingness to reach out to disadvantaged populations globally as we did to address the HIV epidemic and the even more deadly Ebola virus that was African centric? Most likely yes. We saw that Ebola in Africa threatened all of us on every continent. And now we have another indication that we will, as human civilization and not just one nation or group of nations, again address a global crisis with the awareness of “oneness.”

Dr. Noubar Afeyan, Chairman and Co-Founder of the health company Moderna, was recently interviewed by Fareed Zakaria on the lessons we’ve learned from the Covid infection and how some very positive things will come out of the international nightmare we’ve all been living. Dr. Afeyan, an Armenian-American born in Beirut who emigrated to the US from Canada has over 100 patents to his name. As you can tell by the trail of countries in his past, he is essentially convinced that we are all one humanity, sharing one planet, and required for our own safety to care about the well-being of those in distant lands.

When Fareed asked whether we should be concerned that some countries like the US or Britain might engage in vaccine nationalism and not be willing to provide the vaccine to everyone on the planet regardless of whether they could pay for it, he observed that a case of Covid anywhere in the world will replicate with ferocity and blossom into a full-scale health pandemic that will return to US shores given the high degree of international mobility. Fareed summarized this point by saying “So you mean, we are all only going to be secure if everyone is secure.” With that summary of Dr. Afeyan’s observations, the veil has been pulled back on the key characteristic of the newest expression of human evolution.

Most people don’t stop to think about the fact humans have now gone through approximately 32 different evolutions (the exact number depends on which anthropologist does the counting, but you get the point). All the prior species have died off since our lineage broke from the pre-hominid ancestors of the chimpanzees, bonobos and great apes more than six-million years ago. There are no more Neanderthals, no more Homo Erectus, no more Australopithecines (that was the famous “Lucy” of 2.5 million years ago). They all died out as modern humans evolved.

And soon, the dominant species that created our present civilization, Homo Sapiens Sapiens, will also be fully gone. It is dying off. You are presently witnessing its death throes. The new species that is replacing it was named more than a decade ago out of collaborative research by my recently deceased dear friend, Barbara Marx Hubbard, and I when we landed on “Homo Universalis” as the name for this new species.

Homo Universalis doesn’t have to be taught that we are one with each other, one with the biosphere, or one with the cosmos. They are inherently aware of it. By understanding the oneness of all things, the civilization Homo Universalis is creating knows that healing nature is healing ourselves, that healing our relationship to all people on the planet is the future basis of how we will, at last, be able to experience true “Peace on Earth and Good Will to All.”