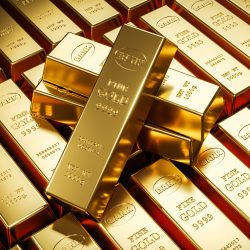 In the World business Academy’s New Business Paradigms September 2019 podcast, we told listeners to sell whatever stocks they owned and invest their portfolio in one of two gold Exchange Traded Commodities (ETC) funds. At that time gold was trading at $1,231.91 per ounce. We explained that it was not likely that stocks or bonds would prove to be as solid an investment as gold in the period of time directly ahead, and owning gold had the additional benefit that you didn’t have to participate, or even watch, the roller coaster stock markets we could see coming. We warned folks that the market was in for a prolonged period some have correctly characterized as a “wild ride.” Why put yourself through that nail biting experience when you could go to bed and sleep soundly owning gold, knowing that it won’t be worth less over time but likely more. Finally, we pointed out that the “markets” are not the same thing as the economy and that the two were splitting ever further apart.

Well, what has happened since then? As I write this in September 2020, gold is trading at $1,976.15 per ounce, an increase of 59.2 percent since last year. That incredible increase in value was what we thought would happen but didn’t want to formally endorse as we wanted to recommend gold for the safety it provided, knowing that it wouldn’t “crash” even if the market did. It is only natural that folks who took our advice are frequently calling and writing, as they have done from time to time when it appeared that the market might go up dramatically, to find out if it is time yet to sell gold. The answer is an emphatic “NO.” In fact, if you are still hanging on to any stocks, bonds, or excessive cash, I strongly urge you to sell them and purchase gold from one of the two ETCs below.

Before explaining why buying gold is still such a good idea, let’s look at how the stock markets have fared since we bought. Compared to gold’s 59.2 percent rise, the Dow Jones only rose 12.7 percent in the same period, and has that been a roller coaster! Even with dropping Exxon and adding stronger stocks along the way to support the Dow’s climb, it has performed very poorly and is about to experience another “correction” sell-off. Watch for it. Similarly, the S&P 500, which has also been adding and dropping individual stocks in order to shore up its performance, and which largely relies on the individual value of Apple, Amazon, Microsoft, Facebook, and Alphabet, only produced a 27.2 percent gain, or half of what gold did! The NASDAQ has done much better than the other two leading indexes largely because tech (including Tesla) rose and internet retailing stocks are booming even, as commercial retail and shopping centers are in an industry-wide insolvency challenge. Still, NASDAQ is up only 54.3 percent against the 59.2 percent gold achieved over the same time frame and the NASDAQ is also in for a correction as the real economy continues to trend downwards in the US and globally.

So, why is gold up? Gold goes up because of three main factors and one small factor. The three main ones are: 1) fear of future financial instability—gold has been seen for millennia by every culture in the world as a storehouse of wealth for “flight to safety” reasons; 2) gold is a great hedge against inflation, which Chairman Powell of the Fed (and even Angela Merkle in Germany—until recently a fierce deficit hawk) stated he would be shooting for preferring inflation to support job creation; and 3) gold is tethered to the US dollar as the world’s reserve currency, which at this time is increasingly being eroded, so it will rise in price as the dollar continues to fall against other major currencies. Did I write “continue to fall?” You bet. Have you checked how the Euro has recently appreciated against the dollar as well as several other global currencies? That appreciation against the dollar has just begun and will continue with accelerating force in the months and years ahead insuring a long “run” for gold’s rise because it is priced in dollars. When, not if, the dollar ceases to be the refuge for “flights to safety” by individuals and governments around the world, the massive US deficit will come home to roost. Another use for gold often referenced is the high-end jewelry market. Although the total market for such jewelry is not as large a factor as the other three listed above, watch, however, if the manufacture of solid gold chains dramatically increases. That would be an indication that people are buying them so they can put them around their neck in order to flee should their respective country of origin destabilize. When gold is made into chains so one can “wear one’s wealth” as fully portable, it will begin to be a significant new fourth source of demand that will drive the price even higher. You may recall pictures of people fleeing Thailand with many, many chains of gold around their necks in order to avoid the Pol Pot regime and be comforted by their wealth when they landed in their new home countries. Imagine, wearing as little as 50 pounds of gold on your body at today’s prices provides $1,600,000 of value (which will be much higher by then) to use to relocate to a new country. The Academy believes that type of purchasing will begin to be significant within the next decade or two even though it is not a major factor today.

What is the smartest way to own gold? Own the metal itself, called “gold specie” through an intermediary. Don’t buy gold stocks as they will fluctuate with market conditions and you don’t want to have to predict those. Don’t buy the metal to physically hold as you’d have to pay a lot to store, insure, and safeguard it in your possession. It is harder to sell the actual metal quickly for a fair price than it is to let “someone else” own, store, insure, and safeguard it for you. Those “someones” are called ETCs. My favorite is State Street Gold Minishares with a very small 0.18 percent “load” or management fee. Granite Shares Gold Trust has an even smaller “load” of only 0.175 percent, but I do not know their company as well. Either way, you can be sure of one thing: gold will go sideways or up in the foreseeable future—which is something I can’t say for stocks or bonds. If you want to know when to stop buying or start selling gold, send a note to [email protected] and we’ll tell you how to stay on our list to be notified as we track fundamental economic changes occurring that cause us to re-think our gold position.