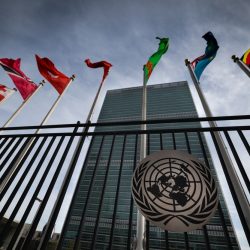 Time for another reboot

What ever happened to the League of Nations?  You know, the global organization founded on January 10, 1920, by the Paris Peace Conference that ended the First World War? It was created in order to get all willing nations to band together in an attempt to prevent all future wars. The US never joined, and the League was short-lived. After a few initial successes here and there, it fell apart in the 1930s.

It failed to act when Japan invaded Manchuria in February 1933 because Japan voted against censuring itself and walked out of the League. It also failed to talk Mussolini out of starting the Second Italo-Ethiopian War. Instead, the League’s negotiations provided “cover”, and as Mussolini pretended to consider the League’s position on a peaceful resolution, he used that time to ship his army to Africa. The League “dithered” while Mussolini acted, and by the time it sanctioned Mussolini, he had already conquered Ethiopia (sounds a little bit like modern Crimea). The League’s role proved to be moot once again, and Italy dropped out of the League as Japan had done earlier.

The League’s peacekeeping mission had failed after scarcely more than a decade. By the mid-’30s the various nations of the world began arming up again for war. When Germany invaded Poland in 1939, the League’s offices in Geneva were shuttered and never reopened.

Although the League never functioned again after the onset of World War II, it wasn’t formally disbanded until April 19, 1946.  This is the date when all its powers (such as they were) and functions were transferred to the then young United Nations, which had been founded on October 24, 1945, with 51 signatory nations (193 as of today). This time, the US was one of the original member states.

This historical reflection is more than an idle stroll down memory lane. It is critical that we understand how the League of Nations arose, how it ended, and how it was the direct precursor to the United Nations of today, which itself arose directly from the victorious Allies’ desire to stay together as a group to advance their collective peacetime objectives.

Pursuant to the UN Charter, the United Nation’s objectives include maintaining international peace and security, protecting human rights, delivering humanitarian aid to the afflicted, promoting sustainable development, and enforcing international law. All very laudable objectives and worthy of accomplishing in these modern times, but the most unique feature of the United Nations at its founding is its commitment to Human Rights. Thanks to the indefatigable and constant prodding by Eleanor Roosevelt herself, it adopted the Declaration of Human Rights, which remains to this day the most sweeping set of commitments that define human rights ever agreed to by a major international body.

Well then, has the United Nations lived up to its founding documents? Is it an effective peacekeeper and global arbiter of human rights?

Tragically, not.  It has been increasingly seen as bloated, financially irresponsible defective, irrelevant, or an actual impediment to effective collective action in the pursuit of both peace and the advance of human rights.

The United Nations failed us with the UN Mission to Somalia in 1992-1993 when the 25,000 troops sent there were ultimately pulled back after the casualties sustained in the Battle of Mogadishu. Similarly, the Mission to Bosnia from 1995 to 2002 was characterized as a misadventure that heaped ridicule on the UN for its indecisive and confused mission in the face of ethnic cleansing. The UN also tragically failed to live up to its mandate in 1994 with the UN Mission for Rwanda, which was supposed to intervene to stop the genocide that roiled that country. It failed at that, and lost credibility for the hapless way the UN Security Council failed to get a grip on the tragedy. And the most glaring failure of all: despite the Security Council’s clear rejection in 2003 of the United States’ attempts to get approval to invade, President George W. Bush invaded Iraq anyway. Those sorts of repeated incidents time after time have not only called the effectiveness of the UN into question, but they also challenge its very legitimacy. It is an institution that may have outlived its usefulness.

And now, the situation is revealed to be much worse. Clearly, the UN Security Council is totally dysfunctional because the “permanent members” (including Russia and China) can block any meaningful action. The “United” Nations are anything but “united.”

How can it be that a body pledged to protect Human Rights and pledged at its core to “maintaining international peace and security” can be controlled by Russia’s veto?

There is not a single doubt within the international community that Russia has engaged in widespread atrocities, war crimes, and even genocide. How can they even remain a member of the United Nations, let alone hold a blocking veto on the Security Council, when they are violating all the basic rights enshrined in the UN Charter? If Adolph Hitler had joined the United Nations before 1939, wouldn’t they have expelled Germany when it invaded Poland? How about when he engaged in war crimes, atrocities, and genocide? Putin has committed each of these offenses against humanity. It’s amazing, that with all the brutal dictators who have run countries that belonged to the UN, only Yugoslavia was ever thrown out!

It’s time for what computer folks would call a “re-boot.” If a bloody, war-mongering, genocidal autocrat wants to behave that way, there should be a rule that says they be expelled immediately by an appropriate vote not subject to a Security Council veto.

We need to go back to basics and invite all the countries that really want to abide by the UN Charter to either: a) change the Charter to eliminate veto votes by any Security Council Member, and make all votes in the Security Council subject to a majority or supermajority vote; or, b) drop out of the UN and start a new organization that will be more capable of handling the challenges of the modern world.

As revealed by the history above, the United Nations itself was a “re-boot” of the League of Nations. It is abundantly clear that another re-boot is now in order. Failing to do either (a) or (b) will leave the current UN in a position of becoming increasingly irrelevant and the international toothless tiger that it is currently perceived to be.