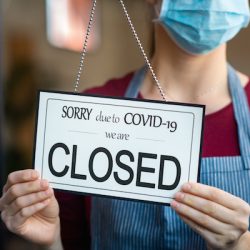 “This isn’t a cash-flow issue. This is true real demand destruction. That money is gone. They’re not going to recapture it six months from today.” – Mark Tepper

On this episode of New Business Paradigms, Academy Chief of Staff Kristy Jansen and Academy President Rinaldo Brutoco discuss the ways in which the failing airline and hotel industries are a facet of the changes that are part of the new reality we are living in.  Rinaldo considers prominent retailers that have gone bankrupt in the past two weeks as untenable levels of debt have become crippling in the wake of the Covid-19 pandemic (think JC Penny and Neiman Marcus) and extends his arguments to the broader entertainment industries.  He uses the example of some bars or restaurants making packaged deals with nearby movie theaters or example.

The larger point this episode considers is that much of the economy as we know it is collapsing and more than ever, previously radical ideas like basic income and universal healthcare are sounding more and more like mainstream solutions to help real people remain solvent as the gig economy plummets and debt everywhere is rising at astounding levels.  The latter half of the show focuses on economic indicators, the artificially high price of oil, and reasons not to invest in hotels, as well as solutions to homelessness in the United States.  Who’d have thought the two could be connected?!?