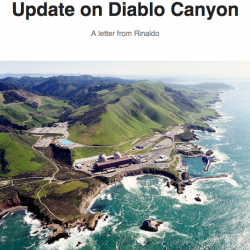 Although the California Supreme Court refused to hear our case against the continued operation of Diablo Canyon, we are confident that the arguments we presented to protect the California Environmental Quality Act (CEQA) will someday become law.

Listed below is a link to the documents we presented at every level of this case – from Superior Court to Appeals Court, to the Supreme Court. Although we were not successful in getting the California Supreme Court to hear our case, I am as proud of the case we presented as Clarence Darrow was of his work at the end of the Scopes Monkey Trial. You will recall that William Jennings Bryan successfully argued that evolution could not be taught in school as humans descended from Adam and Eve in the Garden of Paradise, and thus evolution could not be true. Darrow had countered that evolution was a scientific fact and that religious beliefs or other prejudices should not be allowed to dictate what a teacher in Tennessee could teach in his science class. Darrow went to the end of his career knowing that he was correct and that the law would eventually reach the same conclusion. That’s how we feel at the Academy.

I am grateful to each and everyone one of you who supported our Safe Energy Project, first to close San Onofre and recoup $1.4 billion for SCE ratepayers, and second to try to close Diablo Canyon now – instead of exposing the public and the environment to seven years of additional ongoing risk of catastrophic failure and escalating cancer rates until this nuclear plant is finally closed in 2024/25.

At the end, of the 16 environmental groups that originally requested the Academy to take on the CEQA implications of Diablo Canyon’s continued operation, each and every one of them dropped out along the way as a result of political and financial pressure. The Academy was literally “the last man standing:” the only group that saw this campaign through to the very end – to the highest court of California.

As Paul wrote to the Corinthians, “I have fought the good fight, I have finished the race” – a statement that applies to the World Business Academy and all of you who have supported this noble and just cause.

We will continue now to focus even more intently on our efforts to move California to a 100% renewable energy economy [1] as quickly as possible using renewable energy systems supported by a statewide microgrid infrastructure, [2] including our efforts at the local level supporting Community Choice Energy (CEE) and the Montecito Microgrid.

1 Please watch this 20-minute video from November 2017 on the California Moonshot proposal, originally proposed 5 years ago, and which is now gaining statewide traction as the potential solution for assisting California to be 100% “green.”

2 Please watch this 40-minute lecture to the AES 4th International Grid Technology Symposium for a definitive review of how the California Moonshot will lead to the Hydrogen Economy in California and globally.

All legal filings for the case can be found here.