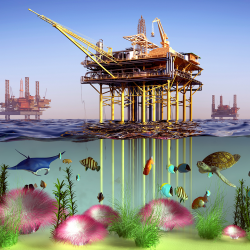 By Robert Perry, Director of Research

In facing our climate crisis, a lot of emphasis is placed on adding to, or replacing infrastructure. While this impulse is a logical reaction in the transition to clean energy, a strategy to repurpose existing facilities should always be considered first as a means to accelerate the transition, while also saving the time and expense in removal and environmental restoration. We all need to look around and discover how existing infrastructure can be used in a new and better way.

How can Santa Barbara communities repurpose their infrastructure? Let me count the ways:

Offshore Oil Platforms as an Offshore Wind Anchor. We have 20 oil rigs sitting off our coastline, and to most people they are a visual blight. However, there is high offshore wind potential off of Point Conception with platforms that could serve as anchor points for a floating offshore wind farm. Currently, Santa Barbara lacks diversity in renewable resources, so any offshore wind generation in the late afternoon/evening hours would go a long way to provide more energy security to our area. From an aesthetic standpoint, there is also an opportunity to transform these utility structures into something more elegant, with the possibility of establishing an eco-resort catering to divers wanting to explore the platform’s underwater ecosystem.

Small-Scale Reservoir Pumped Hydro Storage. One physical energy resource often overlooked is gravity, which is omnipresent and derived from the conversion of potential energy by virtue of elevation. Given gravity’s ubiquity, it would seem natural that every opportunity should be investigated, with the most obvious being the conversion of every local reservoir into a pumped hydro system. For coastal Santa Barbara County, there are many such reservoirs that could be part of a pumped hydro system in combination with either a lower reservoir or an injection well into local aquifers. Of particular interest to me is the Glen Annie Reservoir, which happens to sit adjacent to the Goleta substation that delivers all our transmitted energy (see inset). While most people when discussing hydropower envision massive dams such as Hoover or Oroville, it should be noted that pumped hydro systems are downward scalable and can provide significant energy storage capacity in relation to local system load. Covering these reservoirs with floating solar PV arrays would also reduce evaporation and provide some of the energy during the day to pump the water up from the lower reservoir or aquifer. 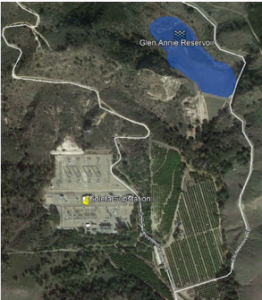 Turbines for Gravity-Fed Water Lines. In developing energy planning, every community should evaluate and develop its water delivery system to maximize the use of gravity (avoiding the need for pumping stations) and where possible, feature in-line turbines in water lines with sufficient gravitational pressure. Earlier this year, Portland and start-up Lucid Energy installed 50 feet of pipe segments which generate an average of 1,100 megawatt-hours of electricity every year. That’s enough renewable energy to power about 150 homes. Not a bad first step!

Surface Parking Lots to Affordable Housing. As I have previously noted, Santa Barbara’s path of least resistance to building a meaningful supply of affordable housing would be to lease the land currently used as city-owned parking lots and build space-efficient, high-density housing with a wide range of common area features. By locating low to middle-income residents closer to their work, both Santa Barbara’s housing and commuter crunch could be greatly reduced.

Wastewater Purification Systems. Although last winter provided a much-needed respite from seven years of drought, we are still working from a deficit when accounting for depleted groundwater reserves. Our wastewater systems, while operated to their maximum capability, need further expansion with additional purification stages that allows for a more closed wastewater system. Nothing more harmful than discharging waste effluent into the channel!

Modernization of Our Energy Grid. Last, but never least, is our electrical distribution system that is almost completely reliant on energy delivered through two coterminous transmission lines, and the spectre of public safety power shutoffs looms with two recent events which were fortunately limited to the unpopulated areas west of Goleta. The good news is that these wires can also form the backbone of a distributed system where energy can be exchanged among properties located along the same circuit. Instead of electricity moving top-to-bottom, a distributed system operates from the bottom up, with excess energy moving up from circuit to substation and maybe one day even moving back down those transmission lines to another community microgrid on the statewide transmission system.

These are just a few obvious examples, and I invite everyone to think about how other facilities operate and can be repurposed to work better or in synergy with other systems. In 2018, we created a concentric graph identifying different areas of synergy (see below) based on work by energy visionary Lorenzo Kristov, and he is working with the Academy and other organizations to develop Advanced Community Energy (ACE), a collaborative platform that would facilitate the development of individual and networked community microgrids. With the right focus, the future is not as distant as it seems!