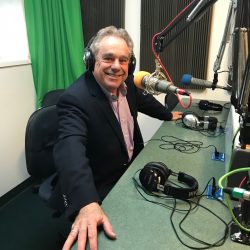 SANTA BARBARA, California – Rinaldo S. Brutoco, noted Santa Barbara business leader, co-author of Freedom from Mid-East Oil, and futurist, will discuss the evolving crisis in the Middle East and its implications for the U.S. economy and the global environment and clean-energy options when he appears this week for a two-hour segment on the popular late-night syndicated radio show “Coast to Coast AM.” The segment is scheduled to air from 10 p.m. to midnight on Thursday, Oct. 3, on area stations including KTMS 920 AM in Santa Barbara and KVTA 1590 AM in Ventura.

Brutoco is the founding president of the World Business Academy, a Santa Barbara-based think tank devoted to addressing climate change and advocating for sustainable energy use by working to elevate the consciousness of people in the business community. Among the many projects being incubated by the Academy, one stand-out is “The Optimist Daily” (www.optimistdaily.com), which shares positive solutions-oriented news from around the world five days a week.

“Coast to Coast AM” sought Brutoco’s expertise on the thousand-year split of the Sunni and Shia Muslim sects, and the implications for Iran, Iraq, Afghanistan, Yemen, and Israel. They are particularly interested in Brutoco’s assessment of Middle East tensions as it relates to the price of oil and gold, and how this interacts with the U.S. economic future. They will also be discussing how events unfolding in the Middle East will impact clean-energy alternatives and the many elegant solutions available right now to clean the environment.

“Coast to Coast AM” is estimated to have a cumulative weekly audience of about 2.75 million unique listeners, making it the most listened-to program in its time slot. The program is heard on more than 600 stations in the United States, Canada, and Australia.