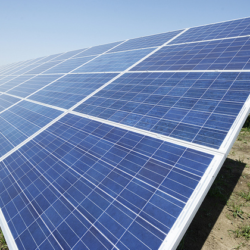 Deutsche Bank has released a report concluding that the cost of unsubsidized solar power is about the same as the cost of electricity from the grid in India and Italy, and that by 2014 even more countries will achieve solar “grid parity.”

During 2013, China is expected to supplant Germany as the world’s biggest solar market. China expects to add 10 gigawatts of new solar projects this year, “more than double its previous target and three times last year’s expansion.”