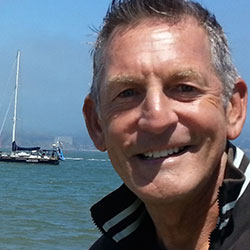 Bob Beth joined the Academy in 2014 as Special Advisor to the Clean Energy Moonshot charged with evangelizing the Moonshot in Oceania and Asia Pacific and charged by bringing whole-system vision and leadership to creating joint social ventures to share and scale the Academy’s thought leadership and relationships in accelerating the adoption of a Zero Carbon Economy.

On behalf of the Academy, Bob is actively engaged in forming and nurturing relationships globally leading to private/public as well as social venture/philanthropic collaboration to bring significant contributions to the whole-system transformation of the world’s energy system from being fossil fuel-based to being zero carbon-based. He led articulating Impact Procurement as a general approach to using supply chain purchase commitments to unlock financing for the adoption of regenerative supply.  Bob is calling for a Clean Hydrogen Moonshot through an emerging commercial venture named AHA – Algorithmic Hydrogen Alliance in service to Global Goal 7 – Affordable and Clean Energy.

He opened a chapter of the Academy in New Zealand to serve as a base to accelerate New Zealand’s leadership as a supplier of renewable energy for export to Asia and Oceania. See this article of Bob’s keynote presentation to a government-sponsored Marine Renewable Energy Workshop in Wellington, NZ, 8 May 2015.

Bob thrives at the leading edge of innovative disruptions and has spent his four-decade career starting ventures that utilize advanced technologies and innovations in business models and human potential understandings to help new or existing companies leap well ahead of the competition often into uncharted new opportunities. During his many years based principally in San Francisco, Bob has been a close colleague or friend with several of the legends of Silicon Valley garnering great insights from these change makers.

Bob loves nature and adventure, and has been a lifelong sailor and snow skier. For over a decade, he has spent full seasons each year, effectively living off the grid, cruising his sailboat throughout New Zealand, Australia, and the South Pacific.