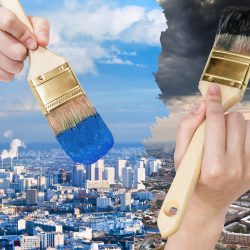 With 2018 coming to a close, a lot of focus has been placed on the accelerating urgency of climate change and how we can mobilize to defend humanity from its own extinction. Various experts, technicians, and scholars are tirelessly working on this Gordian Knot, trying to loosen the strands so we can preserve the planet for future generations. However, current and emerging technologies are not the issue, and the investment community stands ready to deliver a massive infusion of capital to move us forward. The only piece remaining lies with each of us, and all of us, to come together and move as one to climb out of this hole we and our descendants have dug for ourselves.

How can we accomplish this seemingly unattainable goal? What medium exists to quickly bring social awareness into focus? The answer is clear and lies with what is currently the most neglected of human endeavors: the arts and humanities. To borrow from Rod Serling, I submit this example for your consideration:

I’m sorry, but I don’t want to be an emperor. That’s not my business. I don’t want to rule or conquer anyone. I should like to help everyone – if possible – Jew, Gentile – black man – white. We all want to help one another. Human beings are like that. We want to live by each other’s happiness – not by each other’s misery. We don’t want to hate and despise one another. In this world there is room for everyone. And the good earth is rich and can provide for everyone.  .  .  .

To those who can hear me, I say – do not despair. The misery that is now upon us is but the passing of greed – the bitterness of men who fear the way of human progress. The hate of men will pass, and dictators die, and the power they took from the people will return to the people.  .  .  .

Relevant today as it was then, the excerpts above were employed by the band Coldplay in its performance of “A Head Full of Dreams” at a concert before ~50,000 people in Buenos Aires and Sao Paulo. This is the power of the visual, musical and lyrical arts: to broadcast a powerful message that aligns the social consciousness. Combined with our technological advances, humanity can still conquer the most dire threat it has ever faced. To this end, the humanities must be supported just as vigorously as science and technology. We need every resource in our possession to overcome this challenge.

Please use this time during the holidays and throughout the coming year to consider supporting the arts in any way possible, whether it be through urging elected representatives to champion more funding for arts and humanities, donating to organizations such as the National Humanities Alliance, or just going to a concert, play or reading, and letting artisans know they play an important role in solving the growing threat of climate change.