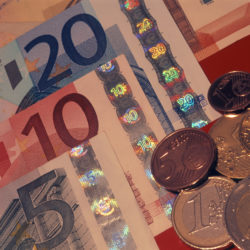 Modern economists and theorists agree the Euro is in serious, if not terminal, trouble. Experts are keeping close watch on its every movement, and monitoring the uncertainty each movement creates in global monetary markets. We are continuously reminded that we live in an interdependent, volatile world: if the Euro fails, so does our global financial system.

European leaders are at a stalemate and appear to be unable to get their financial act together. This observation occurs as Europe drops deeper into a recession, the U.S. is fighting hard to get out of one, and the economies of China and India are growing slower than projected.

There is strong consensus on the main problem that is undermining the Euro’s efficacy: it has a design flaw. When the European Union created the European Monetary Union (EMU) and launched the Euro, it unified monetary policy across politically and economically diverse countries. But it omitted a unified fiscal policy that would ensure responsible borrowing by member nations.

The solutions posed to cure this oversight and address the current crisis include disbanding the Eurozone. The alternative solutions proposed for the current crisis include having the European Central Bank indefinitely pump money into the system (which most agree is unreasonable and unsustainable, and which in any event is subject to further legal challenges), as well as having Germany rescue the crisis-stricken countries in the EMU by guaranteeing their debt. However, all these ideas side-step the question that keeps economists awake at night:

“How are we going to rebalance the European economy when the disequilibrium is caused by the member countries’ vastly different productivity levels? How do we craft a policy that addresses the causes of the Eurozone members’ fiscal crises, which range from high productivity (Germany) to negative productivity (Greece) to poor investment decisions that lead to reduced productivity (Spain)?”

At this juncture in the Euro’s history, it is impractical, and possibly deadly, to European and global economies to tear up the Euro’s foundation and rebuild it from scratch. Instead, the EMU has wisely put the Euro in a box and shut the lid, attempting to shield it, while piecing together a solution that will not rock the existing boat and will be applicable to widely divergent country-specific economic conditions.

There is another such protective box that is a well-known component of the mythological history of one of the main players in the European economic crisis. In the Greek myth of Pandora’s Box, Pandora, the first female human, is handed a box from the gods and told not to open it – ever. She attempts to follow that mandate, but eventually her curiosity overrides her obedience. She opens the lid, unleashing into the world all things evil.

The Euro currently lives in such a box. Most people of knowledge and vision, including the Academy, agree that lifting the lid, exposing the inherent flaws in the Euro and letting it tear itself apart is not worth the potential financial chaos this would unleash. It is just too destructive.

But rather than sitting beside a closed lid, hoping that the situation will somehow right itself, we are proposing another approach – one that could actually encourage prudent fiscal management in the EMU states while preserving a unified currency. Once again, we can turn to a time in Europe’s historical past for a potential solution.

Enter any great European cathedral built during the Middle Ages, and you will be awed at the majesty and expanse of its entranceway and main chamber, known as the nave. Perhaps as you gaze around, a question will intrigue you: How does this immense, open structure stay up with just the support of a few columns?

The answer is: it doesn’t. Support structures outside of the nave give it stability. These support structures, built around the main structure, are called flying buttresses. Every European builder knew that without the support of these buttresses, the entire cathedral would collapse. These craftsmen did not scrap the entire idea of the cathedral. They found ways to structurally shore it up without compromising its use, purpose and integrity.

The Euro in and of itself is a very useful institution. So, rather than scrap the entire concept, we believe that we should free the Euro to do what it was initially meant to do – provide a unified European currency that can compete in a global economic environment – by shoring it up from the outside.

What would a flying buttress look like for the Euro? By encouraging individual countries to create their own independent, country-specific, complementary “neo-currency,” we would rebalance incentives for member nations and take some of the pressure off the Euro – the single pillar currently holding up the EMU and with it the entire European economy.

By leaving the Euro intact as the umbrella inter-sovereign currency and by creating complementary currencies at the sovereign national level (neo-currencies), each country will be able to let its neo-currency devalue within its borders without threatening the value of the Euro across borders. In this way, all existing debts in Euros, bank accounts in Euros, and all contracts in Euros can be sorted out over time while each country’s neo-currency will be left to float up and down against the Euro.[ref]Harvard’s economic historian, Niall Ferguson, on a recent CNN program posited that the only real problem with allowing Greece or some other nation to pull out of the Euro would be the chaos which would follow since, in his scenario, all the Euros in the banks of that country would be rendered useless, all contracts in Euros would become unenforceable, etc. By allowing a neo-currency to exist in parallel with the Euro, there would be no need for a country to pull out because a natural devaluation would occur within the country; the taxes would be paid in that devalued currency thus creating value for it, and it would be used for local transactions. Hence, all Euros could remain in their respective bank accounts and all contracts could remain in effect. There would be no automatic default across all contracts.[/ref]

The logistics and interface of the Euro and complementary neo-currencies would work as follows:

Citizens of each country will be allowed to pay their taxes in their respective neo-currency, thus giving the neo-currency inherent value within the country of origin.

Neo-currencies will be a flying buttress of support for the continued vitality of the Euro because they will let Eurozone countries rebuild their economies without leaving the Euro.

The people of Greece and other challenged countries will have a semblance of power over their fortunes and their own destinies by being able to let their domestic currency undergo a devaluation without affecting the Euro.

When countries with much higher borrowing costs than Germany’s — such as Greece, Spain, and Italy — adopt a neo-currency, their small companies’ borrowing costs will drop, allowing them to grow again and contribute to the growth of the domestic economy. As such domestic companies become financially stronger over time, they will be able to purchase Euros to transact commerce outside their own country; neo-currencies will be banned from international commerce.

Countries with deflating economies will automatically see their neo-currencies deflate as they float daily against the Euro. This will provide an exit from the downward spiral of austerity as these countries start to operate in their respective neo-currencies.

Once a country has its own neo-currency for domestic transactions, the domestic economy will find a new base level from which individual businesses can rebuild and become “players” in the larger European economy where Euros are used. Over time, each struggling country will get stronger internally by engaging in transactions they can afford.

The Euro PLUS neo-currencies scenario described above creates a two-tiered system that takes the pressure off the Euro by letting individual countries allow the devaluation of their neo-currencies to each country’s specific appropriate level, while preserving the integrity of the Euro itself for all EMU members’ transactions with other sovereign nations.[ref]The Academy is sensitive to and fully believes that any fiat currency may not be the best solution for countries or society. There are very good arguments that can be made that a big part of our collective problem in the global monetary system beyond the Euro is the total reliance on fiat currencies. The Academy believes there is great merit to investigating this train of thought and analyzing those types of currencies that could replace fiat currencies. However, that conversation is beyond the scope of this article.[/ref]

Euros will continue to build up in all EMU members’ various sovereign bank accounts as the stronger economies continue to grow. The Euro will be protected from a collapse brought on by the fiscal failures of any individual EMU member (or several of them for that matter), and it will be appropriately harder for weaker countries to build up Euro-denominated wealth while their respective economies are still devaluing.

Products and services will be more competitive within countries as well as across borders because in intra-country commerce, travelers and merchants will have the choice to spend neo-currencies or Euros.

The European Union has a history of great institutional success. We are confident that the EU is capable of creating complementary neo-currencies that will relieve the political and economic pressure on the Euro and resolve this political stalemate. The fate of Europe, and conceivably the near-term global financial system, depends on it.

Further reading:
In May of 2012, the EU Chapter of the Club of Rome published a sophisticated discussion of complementary currencies in the report Money and Sustainability: The Missing Link, researched and written by primary author and long-time Academy Fellow Bernard Lietaer. The report includes nine examples of workable neo-currencies. The Club of Rome-EU Chapter formally presented the report to Finance Watch and the World Business Academy at a ceremony in Brussels. Download the report’s Executive Summary.