By Robert Perry, Director of Research

Over the years, I’ve written about Santa Barbara County’s energy resiliency issues, particularly for communities along the coastline in the Southern California Edison (SCE) service territory. I’ve also decried SCE’s antiquated Request for Offer (RFO) process that no longer works in a time when energy procurement means building hundreds and thousands of sites, instead of a few large gas power plants. Finally, I’ve noted how California’s aging energy infrastructure is at an inflection point where developing renewable distributed energy resources (DERs) at or near the point of consumption is the only means of avoiding future public safety power shutoff (PSPS) events.

All these different elements came together last week in a Public Utilities Commission (PUC) proposed decision, ordering SCE and other “load serving entities” (LSEs) within SCE’s transmission grid to procure 2,500 megawatts (MW) / 2.5 gigawatts (GW) of additional energy resources within a three-year period beginning in 2021. Sixty percent of this amount, or 1,499 MW, must be in place by August 1, 2021, less than two years away! Furthermore, SCE’s analysis suggests that up to 5,500 MW may be needed as soon as 2021, with additional capacity needed in the next few years after 2021. Although the proposed “all-source” procurement would allow existing natural gas plants to compete, it could also open a massive new market for renewable energy, energy storage, demand response and other preferred alternatives to fossil fuels.

The underlying concept behind the PUC decision concerns “resource adequacy,” or RA, which according to GridWorks is “a regulatory construct developed to ensure that there will be sufficient resources available to serve electric demand under all but the most extreme conditions.” A central calculation in determining available RA is “Effective Load Carrying Capacity” (ELCC), which is defined as “a percentage that expresses how well a resource is able to meet reliability conditions and reduce expected reliability problems or outage events.”

This ELCC process does not bode well for intermittent renewables such as wind and solar. According to new PUC guidelines, the ELCC of solar PV is minimal, ranging from 0% in December to 39% in July of each year. Furthermore, according to a June 2019 report from Energy and Environmental Economics, Inc., the ELCC of energy storage decreases significantly as more renewable capacity comes online. So, for purposes of procuring 2,500 MW of resource adequacy capacity, there is little to no chance a significant amount will be from renewable DERs, leaving the door is wide open for existing gas-fired generation (GFG) plants to remain online to provide over extended (days-weeks) outages or periods of low production. This is why the proposed decision allows for GFG resources and authorizes continued operation of retiring plants using “once-through-cooling” (OTC) systems past their 2021 retirement dates, if the reliability shortfall can’t be met by other means.

It doesn’t look good, but I believe this is an instance of “losing the battle to win the war.” My optimism is founded on the following:

California’s 100% Renewable Legislation. The 100% renewable objective is now law with SB 100. On September 5, I attended a Joint Agency Workshop on the SB 100 Report that charts the course to actually achieving 100% renewable energy economy, and another workshop is scheduled for September 30. This is a critical opportunity for the public to demand aggressive investment into DERs and alternative storage technologies (see below) that will provide true system reliability.

Emergence of Seasonal Storage Technologies. As shown in the graph below, a 100% renewable energy system will require a broad range of storage technologies, especially those in the extended “Bulk Power Management” column. For those interested, I invite readers to check-out the various gravity-based technologies offered by companies such as American Rail Energy Systems (ARES) and Energy Vault. These resources must be fast-tracked as part of the SB 100 roadmap!

Given its similar properties to fossil fuels, the Academy has long held that renewable hydrogen is the primary ingredient needed to reach the 100% renewable goal. Building seasonal storage reserves for both energy and transportation sectors will require a lot of renewable energy, and we must create energy systems that routinely generate excess renewable energy to these reserves. In previously filings, I offer the graph below to show how California should target the “green line” maximum to create truly 100% renewable system that is both reliable and resilient. 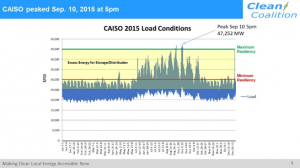 According to GreenTech Media, “Not all parties agree on the significance of the coming grid reliability threat, and the CPUC and CAISO are continuing their analysis, Thursday’s proposal noted. Even so, “given the imminence of the 2021 system reliability needs, there is not time to complete that analysis, allow additional input and vetting from parties, and still have procurement take place in time to meet a potential shortfall in the timeframe of summer 2021,” Administrative Law Judge Julie A. Fitch wrote in Thursday’s proposed decision.”

What actions can we take in light of this decision? Given the short time frame, we will probably have to allow limited use of fossil fuel resources over the next 3-5 years. However, in the interim, we can demand that (1) existing GFG plants be limited to 3-year contracts, with no options for extension (2) operation of GFG resources occur only under the most urgent circumstances and (3) significant, structural policy changes must occur that accelerates development of DERs and alternative storage technologies.

This decision marks one more step towards California’s realization of a renewable energy economy. With momentum building to shift trillions towards a Green New Deal, we must stay informed and advocate our cause at every level of government. More importantly, we must remain vigilant and hold our state and local governments accountable!